Whether you're just looking to upgrade your bathroom or you're designing it from the ground up, one of the choices you have to make is whether to choose a shower curtain or a shower door. While shower curtains are classic, there are a lot of advantages to getting a shower door instead. Here are three of the best ones.

One of the most unpleasant things a person can experience during a nice, hot shower is feeling the shower curtain creeping up on their body. This tends to happen because the air in the shower stall is hotter than the air around it, so the curtain drifts inwards towards the user.

This is a pretty gross thing to experience, especially if your shower curtain isn't as clean as it could be. Shower doors, of course, stay in position once they're closed and you're not in any danger of having it randomly touch you.

Shower doors are significantly easier to clean than shower curtains. Usually, if you're proactive about it, you can simply spray a little cleanser on the door and rinse it off with the showerhead on a regular basis, and that's all it takes. Even if there's a significant build-up of soap scum due to not having cleaned it for a while, it usually just requires a bit of elbow grease to get it tidy again.

Shower curtains, on the other hand, tend to be a bit tougher to clean. Most of them can't be put in the washing machine, and unfortunately, they tend to accumulate mold and mildew as time goes on due to being made out of fabric.

Finally, there is no shower curtain or shower door that won't ever require a replacement. But shower doors need to be replaced far less often than curtains.

Shower curtains can get torn, stained, and covered in mold and mildew, as previously noted. Once this happens, there's really no point in keeping them around, so replacing them is the only option.

With shower doors, however, none of those problems occur. Usually shower doors only need to be replaced if there's an accident that broke the glass, or if the door is no longer closing firmly. Otherwise, you can expect to keep your shower door for years.

Shower doors require a bit more of an investment than shower curtains, but they're well worth it. If you want your showers to be a pleasant experience with as little work needed as possible to keep it tidy, choose a shower door. To learn more about your shower door options, call a glass door and window specialist near you, like Beach Glass & Window Company. 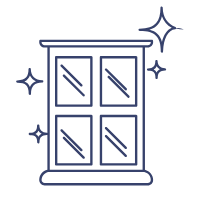 Take a look out your windows. Do you like the view? Maybe the view is beautiful, but you wish you could see more of it. Or perhaps you just wish that the window itself was in better shape so it did not distract from the view! Replacing your windows may seem like a big step, but a window replacement company can make it easy. A good window replacement company can replace your smaller window with a big picture window, or simply give you windows that complement your home's style. We invite you to read the articles on this blog and learn more about windows.